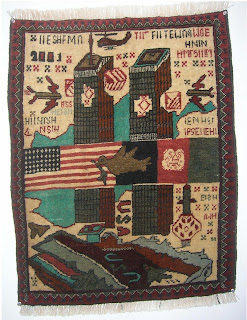 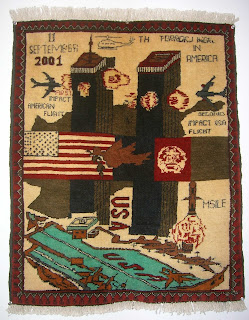 Last month, we purchased a new "9/11" war rug on Ebay, and then my friend, the artist Lynn Basa, lent me one she purchased shortly after the attack in 2001. It's interesting to compare the two.

War rugs originate from the 1979 Soviet occupation of Afghanistan, and mostly depict patterns of weapons, and sometimes maps of specific events or places. 9/11 Rugs appeared shortly after the terrorist attacks in 2001 and subsequent US invasion of Afghanistan.

Both Lynn's and my 9/11 rugs depict the World Trade Center with jets flying into both towers simultaneously. It looks as though the image was based on a collage of media photographs from both seperate attacks. Both rugs depict US and Afghan flags, with a superimposed dove of peace linking them. Both have the outline of Afghanistan in the background. Both are anchored by a closeup of a US aircraft carrier with jets on board and taking off, and a missle being launched.

But notice the differences. On Lynn's earlier rug, all the words are in English, and very legible. There is a lot of detail, especially in the line drawings of helicopter, jets and the windows of the World Trade Center. The palette is very simple and reductive, and curiously, the stars of US flag are reversed.

In the same way that a cartoon that has been xeroxed or faxed over and over eventually loses its meaning, or when the game of Telephone ends up telling a different story after being whispered in so many ears, much of the detail in the new version of the 9/11 War Rug doesn't read like the original. None of the words are legible, except the year "2001" and the letters "USA". There is more color and experimentation with the design, and the jet explosions have become oddly flattened. Many X's fill in the background, depicting, perhaps, explosions, mines or casualties (experienced or anticipated).

Thousands of these rugs have been made since 2001, yet it is virtually impossible to know who the original artist is, or who the many different weavers now are. They are probably women, in the countryside of Afghanistan or a refugee camp in Pakistan. They are probably opium addicts, illiterate, confined to their home, and forbidden to leave unescorted by a male relative.

These rugs are collected by soldiers, including General Tommy Franks who famously bought a bunch as souvenirs and gifts when he retired, and by people like me. They have almost no value for commercial rug dealers, yet they continue to be made, as the tragedy continues to evolve and people need somehow to remember.